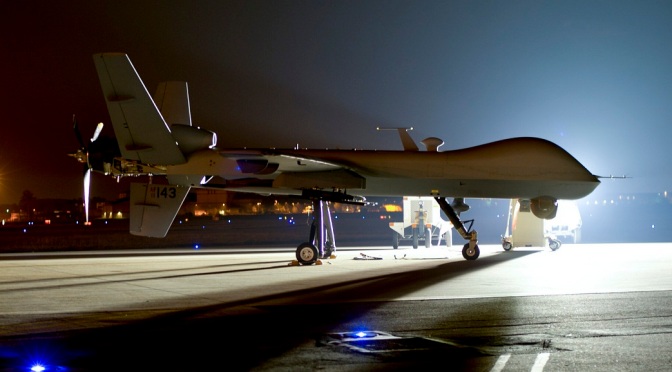 On the 9th of April 2015 I went to see the Drone Documentary at the Doc House at the Curzon in London. I’ve been following the progress of the documentary by Tonje Hessen Schei for many months (noting the many awards it has received: Cinema For Peace award, Best of Fest, IDFA, Best doc at BIFF) and was looking forward to the opportunity not only to see it in full but also to the Q&A session with Hessen Schei and Chris Woods (a journalist who has researched and written extensively on the US drone strikes in Pakistan and who is interviewed in the documentary).

The documentary is beautifully put together, interspersing interview statements with footage from strikes, from games and from scenes on the ground. Having been involved in researching drone strikes for a number of years now I am familiar with the arguments about the problems with targeting and with the (il)legality of US strikes in a country which it is not officially at war with which results from the wide ranging remit provided by the framing of the “War on Terror”.

What was of greater interest to me was the interrogation of the connection between the military and the entertainment industry in the US, what is referred to a “Militainment” (Stahl, 2010). The sheer scale of the connection is astonishing. Hessen Schei provides shot after shot of young boys (I didn’t see any girls) sitting with military recruiters playing video games and discussing their merits. This overlap between entertainment and warfare has been widely commented on (particularly by Roger Stahl), but the documentary brought home the sheer numbers of young people blending these two worlds together, and the way that the US military is actively using this overlap between worlds to recruit to active service, “We need revenge of the nerds”. I have always been somewhat sceptical of claims that drone pilots (either US or UK) are unable to determine the difference between a video game and the consequences of their actions in real life. However, Hessen Schei’s focus on how entertainment is being used to recruit in the US suggests that there might be some issues for drone pilots in the future who have been brought into active service through video games.

It is also interesting to see the wide range of individuals who are currently speaking out against the use of drones, from US military and state officials, to journalists, ex-drone pilots, bereaved families, lawyers in the US and Pakistan. Despite the Obama administration’s claims to have been working within international law it seems that there are plenty of people who vociferously claim otherwise, and the breadth of their arguments is fascinating. Similarly, the interviews with individuals who had been bereaved or who had been injured/disabled in strikes provided a poignant and humanising perspective.

The Q&A session after the screening provided a fantastic opportunity to speak to the director, to Chris Woods and to the surprise guest, ex-US drone pilot Brandon Bryant. Hessen Schei noted that she had specifically wanted to challenge the narrative of precision strikes; Woods spoke of his experiences of visiting people in Waziristan (which is a particularly impressive feat given limitations on access and concerns about security) and noted that “the biggest obstruction [to research] is silence”, something I have previously noted myself. Members of the audience asked about what limitations Bryant has on what he can say and the threat that he is under (from both the US and Pakistan) for speaking out. Another audience member asked whether Hessen Schei’s documentary was rather sensationalist, a comment which she was readily prepared to tackle with aplomb, noting that it had been many years since directors had laid claim to producing ‘objective’ works. I asked about the ethics of creating such a documentary and the potential for exacerbating the trauma of the individuals interviewed by asking them to recount their experiences. It was so interesting to hear about how the process of collecting the data, finding the people to interview, and putting together the film had come about.

My only critique of this documentary comes in its framing. Titled: Drones, it does not distinguish between the use of drones in general and the use of drones by the CIA, specifically in Pakistan, which is actually its remit. Here we see again the classic conflation of this specific series of missions, which are problematic and the platform (i.e. drones) through which these missions are realised. It is possible to argue that the platform enables the US to undertake these problematic strikes, but it does not then follow that every other use of the platform will be similarly problematic. This documentary ignores, for example, the important and largely uncontroversial use of military drones to support ground troops in existing and pre-defined theatres of war. It completely ignores the potential civilian uses for drones. This single story frame is not, in of itself, problematic, merely the way that the story is presented as representing the phenomenon of drones in their entirety, I feel does a disservice. Not only a disservice to the militaries who own and want to use these platforms, but also to the public, who will surely watch this documentary to learn more about a controversial topic. It is, then, somewhat unfortunate that they will be presented with only part of the story, with a title and presentation that implies that it is the whole.

The documentary will be of particular interest to the general public who have heard the commentaries that are critical of the United States’ use of drones, particularly those strikes conducted by the CIA, in Pakistan (and Yemen, and Somalia) and who want to know more about it.

More information on the documentary can be found at the official website: http://www.dronethedocumentary.com/about/

Lindsay Murch is a doctoral researcher in the ICCS and POLSIS and a research assistant in the developing field of drone warfare.

Latest news at the ICCS

Forthcoming events at the ICCS

A blog from the Institute for Conflict, Cooperation and Security

The Institute of Conflict, Cooperation and Security (ICCS) was founded at the University of Birmingham with the purpose of promoting a multidisciplinary and multidimensional approach to the study of conflict and security in global politics. The ICCS blog was established to invoke discussion and reflection on conceptual ideas related to security and the challenges of global cooperation.